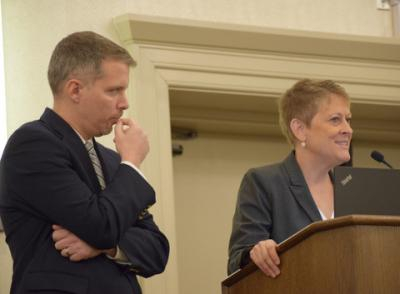 BURLINGTON-The message to the hundreds of professionals gathered at the Hilton Burlington yesterday was loud and clear: A stable life starts with stable housing.  Scholars Kathryn Edin and Luke Shaefer described the poignant interviews they had with poor families before writing their renowned book “$2.00 A Day: Living on Next to Nothing in America.”

“When we asked what they needed most, people consistently said they wanted a home of their own and a job paying $10-$12 hour.” Without the safety of four walls, poor families live in a highly volatile “toxic alchemy” of threats and obstacles, Edin explained.

In another session, Jason Williams of the UVM Medical Center described the health care industry’s paradigm shift as hospital investments in stable housing demonstrate a pay off in terms of patient recovery.  By collaborating with Safe Harbor Health Center and Champlain Housing Trust, the Medical Center has seen dramatic, measurable benefits for formerly homeless people who move into Harbor Place and Beacon Apartments. Without options like these, homeless patients at the Medical Center must remain in inpatient care longer. The cost of developing the efficiency housing units at these two locations is proving to be far less than the cost of inpatient care or state-provided emergency motel vouchers.

In addition to highlighting best practices like the Medical Center's housing investment, the conference honored two statewide leaders for their service and achievements. Vermont Representative Helen Head received the “Legislative Housing Hero” award for her work as Chair of the House Committee on General, Housing and Military Affairs. Head has made improving the lives of Vermonters through affordable housing an integral part of her legislative work for over 13 years.

Polly Nichol received the “Innovation and Impact Housing Hero” award for her decades of service and vision at the Vermont Housing and Conservation Board expanding opportunities for decent, safe and affordable housing for all Vermonters.