$35 million bond would have long-lasting benefits 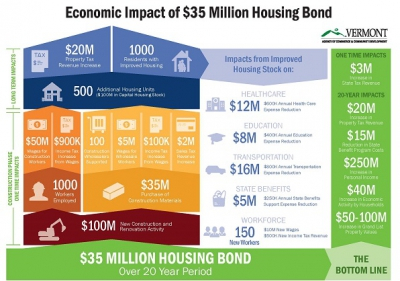 Housing developers, business leaders, smart growth policy experts and poverty advocates joined together to support the passage of a $35 million housing bond this afternoon at a press conference at Vermont’s State House in Montpelier.

Recommended in Governor Scott's budget proposal, the housing bond would address a significant need for affordable housing in Vermont, help to alleviate homelessness, house the workforce, and provide expanded homeownership opportunities for Vermonters.

The housing bond, as proposed, would be issued by VHFA , which would deposit the proceeds into the State’s Housing and Conservation Trust Fund. At least 25% of the homes funded with bond proceeds would likely be targeted at the lowest income Vermonters and another 25% would be targeted at homes affordable to households earning 80%-120% of median income. Statewide, median income for a family of four is $70,200. The bond would be repaid over 20 years.

“Every night, our shelter, just like shelters across the state, is full of people who need and deserve a home,” said Sara Kobylenski, Executive Director of the Upper Valley Haven, based in White River Junction. “We have allowed ourselves to slide into an alarming housing deficit, and the most vulnerable people in our communities are suffering for it. It’s time to support a $35 million housing bond.”

The $35 million housing bond would also act as a stimulus package, generating millions of dollars of economic activity through the creation of hundreds of jobs and the purchase of goods.

“Housing construction is critical piece of our economic engine, and this proposal promises to create hundreds of good paying jobs. It’s also vital to employers who say time and time again how hard it is for their employees or prospective employees to find adequate, affordable housing,” said Tom Torti, President and CEO of the Lake Champlain Regional Chamber of Commerce.

“Housing investment has the ability to revitalize communities, and that’s just what Rutland needs,” added Elisabeth Kulas, Executive Director of the Housing Trust of Rutland County. “We’re looking forward to continuing to move our community forward and this $35 million housing bond will make our neighborhoods more livable."