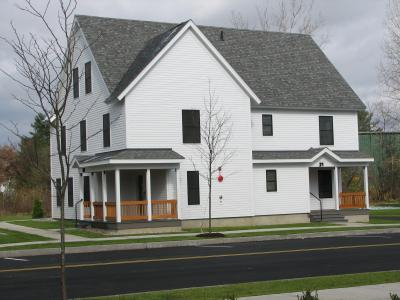 BURLINGTON, VT -- On Monday, April 18, the Vermont Housing Finance Agency (VHFA) Board of Commissioners committed federal low-income housing tax credits and state affordable housing tax credits that will provide almost $25 million in upfront equity to construct and renovate housing for low-income Vermonters and will increase permanent supportive housing for people who were formerly homeless. The $2.578 million in 10 year federal credits and $400,000 in five year state credits support 356 rental homes in 11 communities across the state.

“This year VHFA recognized the urgent need among our most vulnerable neighbors – the homeless – and we revised the state’s qualified allocation plan (QAP) which governs the allocation of these tax credits to give priority to applications that create permanent supportive housing,” explained Sarah Carpenter, Executive Director of VHFA. “One quarter of the federal housing credits will fund 31 units dedicated to people who were formerly homeless. It is clear that this policy change has been successful in helping to create permanent homes for Vermonters who are homeless,” she continued. “Unfortunately we were not able to fund four projects that could have provided an additional 157 affordable housing units.”

The investments made by VHFA today will add new homes to the market in Burlington, White River Junction, and Montpelier. They will also totally renovate and secure the long-term affordability of existing housing in Rutland, Marshfield, Bennington, Shaftsbury and Arlington. All of the units utilize green building and design standards, and will be highly energy efficient.

In downtown White River Junction, a building with 16 units for low income Vermonters will be constructed. The mixed-use project called Bridge and Main will also create one market rate rental apartment and ground level commercial rental space. The development was proposed by Bill Bittinger and Associates.

The historic French Block building in downtown Montpelier will be redeveloped to include 14 apartments for low income Vermont renters and 4 market rate apartments. The development is sponsored by a partnership between Downstreet Housing and Community Development and Housing Vermont.

The Hollister Hill project is a complete redevelopment of 16 existing apartments on 6.6 acres near the center of Plainfield although it’s technically in Marshfield. All the units have rental assistance and will be affordable to extremely low income Vermonters according to the owner, Housing Foundation Inc.

Finally, 22 units were funded to redevelop and preserve the affordability of two existing projects in Bennington county. The new project, called Battenkill North, is a scattered site project with units inBennington, Shaftsbury and Arlington. The project will be developed as a partnership between Shires Housing and Housing Vermont.

At the same meeting VHFA’s Board of Commissioners also awarded the annual amount of Vermont State Housing Tax Credits available for multifamily rental developments. One of those projects, Hickory Street phase three in Rutland, also received federal housing credits described above. The other projects receiving state housing credits were all acquisition/rehabilitation efforts:

·         South Meadow, 64 units in Burlington by Champlain Housing Trust and Housing Vermont; and

In addition to the equity created by the allocation of these housing credits, other funding sources needed for these projects include the Vermont Housing and Conservation Board, the federal HOME program, Affordable Housing Program, local Housing Trust Funds, NeighborWorks, the Vermont Community Development Program, Efficiency Vermont and Downtown Rehabilitation Tax Credits.

The Vermont Legislature created VHFA in 1974 to finance and promote affordable housing opportunities for low- and moderate-income Vermonters. Since its inception, the Agency has helped approximately 28,000 Vermont households with affordable mortgages and financed the development of approximately 8,600 affordable, safe and decent rental units.